First bird was found dead in December 1965. After that three birds have been seen in May, one in September and three in October.

Most records are made in late autumn – early winter, only five in spring and one in summer.

One record: broken-winged bird was found in August 1980 in Joensuu Iiksenniitty. Eighth record for Finland.

One record: July-August 1989 in Värtsilä Selkäkylä. Fifth record for Finland.

The first one in 1983 stayed the whole summer in the province and was seen in three different areas between May and August. Of the other birds eight seen in April-June and one in October.

First record August 1975 Joensuu Höytiäinen channel estuary. In 1983 a bird stayed in the province from May to August. Of the other birds three have been seen in May and three in August.

One record: May 1984 Lieksa Siikasuo. Fourth record for Finland

First record 1961 Liperi. One bird seen in August, all the others in spring.

Two records from the 1970’s: July 1970 Joensuu Höytiäinen channel estuary and May 1978 Polvijärvi Martonvaara. Next ones seen during a strong invasion in July 1994 in Lieksa Talviaisjärvi and Outokumpu Vuonos.

This seabird is really rare in North Karelia even though is very abundant on Finnish coasts and also breeds on Lake Ladoga in Russia under 100 km away. All birds seen in May.

One record: May 1980 Värtsilä Sääperi and obviously the same bird June 1980 Ilomantsi. Fourth record for Finland.

First two shot in Lieksa April 1919 and July 1927. June 1999 a bird was seen and photgraphed in Eno Luhtapohja and was later found dead. The bird had been ringed in Israel in the previous winter.

First breeding in Scandinavia was confirmed in 1933 in Kiihtelysvaara Kummunkylä, where a juvenile male was taken as a pet and later killed. Nowadays seen almost every year. Most of the records are concentrated on a short period in spring from late April to early May. Only a few seen in autumn.

Rarer than Pallid Harrier even though is breeding on the west coast and is abundant in Olonets area in Russia only 200 km SE from North Karelia. Like in Pallid Harrier records are concentrated in spring with most birds seen in May.

First record May 1979 Rääkkylä Ravilahti. Of the records 12 are made in April-May and one in July, September and October each.

First record September 1978 Joensuu Höytiäinen channel estuary. Of the records ten are made in April-May, one in July and six in August-October.

Rare visitor mainly in late spring – early summer, almost all records from mid-May to mid-June. Breeding confirmed in Lieksa in 1885.

One record: April 1992 Kitee Puhos. Only record for Finland. Very rare visitor in Western Europe, but recorded also in Sweden and Norway.

Three reocrds from early 1900’s. More recently seen seven times, four birds in April and one in September and October each.

One record: June 1995 Joensuu Höytiäinen channel estuary. Only ten birds recorded in Finland by the end of 2001.

First record summer 1965 Kitee Juurikkajärvi two and after that from 1983 onwards records of 8 birds.

One record: May 1979 Joensuu Höytiäinen channel estuary. Only record for Finland. Species is breeding in Afrika south of Sahara. There are observations also at least from British Isles, Denmark and Germany.

All records made in May: 1979 Outokumpu Vuonos, 1982 Lieksa Rauhala migrating and 1988 Joensuu Linnunlahti 2 migrating.

One record: September 1973 Joensuu Höytiäinen channel estuary. Third record for Finland. Outside British Isles this species is quite rare in Europe.

First record in 1974 and after that seen yearly until 1986. In 1983 one and in 1984 two breeding pairs were found. After 1986 only 14 records even though elsewhere in Finland has increased in numbers. Most of the birds seen in May – early June.

Appearing very much like Marsh Sandpiper: in 1970′ and 1980′ 2-6 birds a year, recently only 1-2 a year. Like in Marsh Sandpiper most birds seen in May – early June. Breeding confirmed in Joensuu Höytiäinen channel estuary 1967.

First record: June 1978 Tohmajärvi Uusi-Värtsilä. Of the other records two are made in May, one in July and two in September.

Presumably regular but rare migrator in spring. All but two records between late Mars and May. All birds seen have been subadult or juvenile.

One record: May 1989 Lieksa Kevätlahti.

Nowadys seen almost yearly. Most birds seen in May.

All records: November 1986 Rääkkylä Vuoniemi and May 1987 Joensuu Höytiäinen channel estuary eight birds migrating in a flock of Common Scoters.

An exceptionally harsh winter 1902/03 in the north caused the guillemots to invade south from ice-covered Arctic Ocean. In Finland observations were then made in 58 different places. At least seven birds were found also in North Karelia in November and December 1902. After that only four records from Finland.

First record 1962 Nurmes. A bird found in Tuupovaara in January 1983 died, but the one found in Liperi in January 2002 was transferred to Norway and released to the Atlantic.

One record: May-July 1998 Lieksa Savijärvi singing bird. First record for Finland and at the same time for whole of Western Europe. Presumably the same individual was in the area also in summer 1999 and 2000.

One record: found dead in Lieksa 1963. Second record for Finland.

Rare visitor from arctic areas usually in winter, but in 1992 an exceptional invasion when 12 birds were seen in summer.

One record from winter, otherwise between April and September. In recent years 1-2 obviously breeding pairs in Värtsilä.

First record October 1985 Kiihtelysvaara Heinävaara. The latest autumn record in Finland. May 1995 two birds Kontiolahti center and May 2000 a group of 15 Liperi Kaatamo.

One record: Mars 1989 Joensuu Linnunlahti male. First record for Finland. One of rarest birds ever seen in North Karelia, only one other record from Finland and very few from elsewhere in Europe.

Rare visitor allthough is breeding in Russia not so far away. Most birds seen in August or early September, before 2001 only two records from spring. In 2001 a male was breeding in Värtsilä Sääperi with a Yellow Wagtail female and perhaps the same bird was seen in the area also next year.

Only two records until year 1997 when ten birds were found. After that seen yearly. Earliest bird seen in mid-May, most between late May – late July.

First record April 1979 Pyhäselkä Mulo. All birds seen in April-May or August-September. An exception was a juvenile found in Kontiolahti Selkie in July 1988 suggesting breeding somewhere near by.

First record June 1968 Joensuu. In 1984-88 a male (in 1986 two) was staying in Joensuu Repokallio where also breeding with a female Whinchat was confirmed in 1986. Most of the records are from spring or summer, only four birds seen in autumn. All birds identified by the race have been of the eastern maura-race (Siberian Stonechat).

One record: found in a freezer in Joensuu university autumn 1976! Time and place of death unknown.

First record August 1981 Värtsilä Sääperi (third for Finland). Expanding from the east. All records are of singing males in summer. Very late migrator, earliest bird seen on 18th of June.

First record June 1986 Joensuu Iiksenniitty (third for Finland). After that has expanded even more rapidly than Lanceolated Warbler. In summer 2000 first breedings for western Europe were confirmed in Värtsilä Patsola where four adults and ten nestlings were also ringed. Very late migrator, first recordings in spring usually around June 10th even though the earliest bird has been seen on May 21st.

First record May 1982 Joensuu Höytiäinen channel estuary. One record in August, others in May-June.

First record September 1983 Joensuu Höytiäinen channel estuary which is no doubt the best place for this species in North Karelia. 18 records are made in this area and 12 of these birds have been ringed at the observatory. Arrives earlier than Pallas’s Warbler: 23 records made in September and only four in October.

Most birds seen on spring migration in April, only ten birds seen in autumn or winter.

This eastern bunting used to be abundant in North Karelia with tens of pairs breeding in 1970’s. In 1980’s population started to decrease and nowadays only a few birds are seen a year. Since the year 1996 13 records.

1-3 birds seen in most years usually late May – early June. The species most propably breeds in North Karelia.

One record: May 1981 Lieksa Lampela adult male. First for Finland. Only one other record from Finland.

All records: April 1975 Tohmajärvi Nikuvaara and April 1981 Outokumpu Alavi. Decreasing of population in breeding areas in Baltic countries and southern Sweden has affected also the number of birds seen in Finland.

One record: July-August 1994 Lieksa Märäjälahti. First record for Finland. The bird was of the race coromandus living in India and thus considered as an escape.

One record: December 1987 Eno Ahveninen. Only record for Finland. 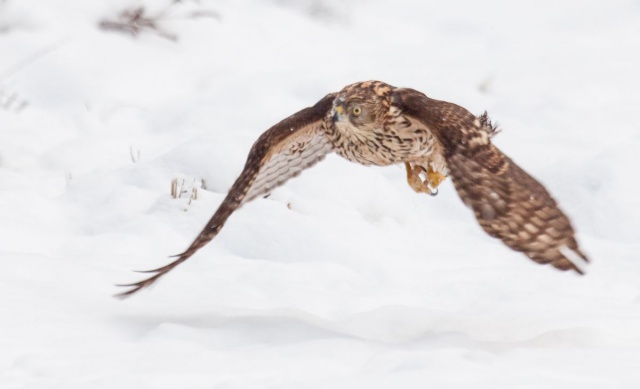