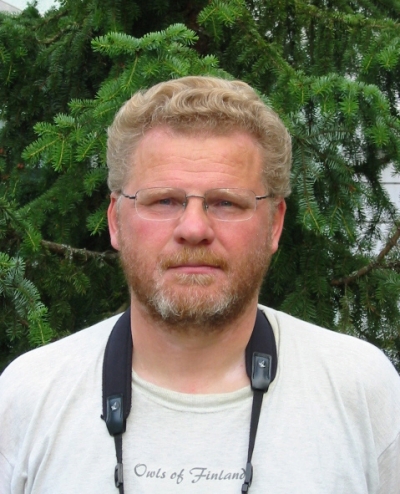 Höytiäinen Bird Observatory in Joensuu, eastern Finland has been operating since 1984. The observatory is situated by the Lake Pyhäjärvi in a delta area of a man made canal. The area is famous for arctic waders resting at the site and for other arctic migration (divers, geese, ducks, skuas). In all 260 species have been recorded in the area, including rarities like White-billed Diver, Great Northern Diver, Greater Spotted Eagle, Pallid Harrier, Red-footed Falcon, Long-legged Buzzard, Baillon’s Crake, Allen’s Gallinule, Baird’s Sandpiper, Dusky Warbler and Woodchat Shrike.

The main activity of the observatory is ringing of the birds all around the year. In winter two feeders are in use to attract wintering birds in to the nets. During spring and autumn migration 12 constant and 5-10 additional mistnets and waderboxes are used to catch migrating and resting birds. In summer breeding birds and their nestlings are ringed. Weight, fat score and wing length are measured of all the birds, in some cases (f.g. waders) also bill, tarsus and tail. The state of moult is also examined of moulting birds in autumn.

Until 1998 the observatory was operaring on well over a hundred days a year and on the average some 6300 birds were ringed annually, the top being over 9000 in 1989. In the beginning of new millenium activity was somewhat lower and the ringing totals declined. Since 2005 activity and thus the ringing numbers have grown again (fig. 1). In all 121 230 birds of 138 species have been ringed at the observatory by the end of year 2014 (table 1). Two most numerous species are Willow Warbler and Willow Tit followed by Redpoll, Great Tit, Bluetit, Long-tailed Tit, Sedge Warbler, Reed Bunting, Robin and Goldcrest. 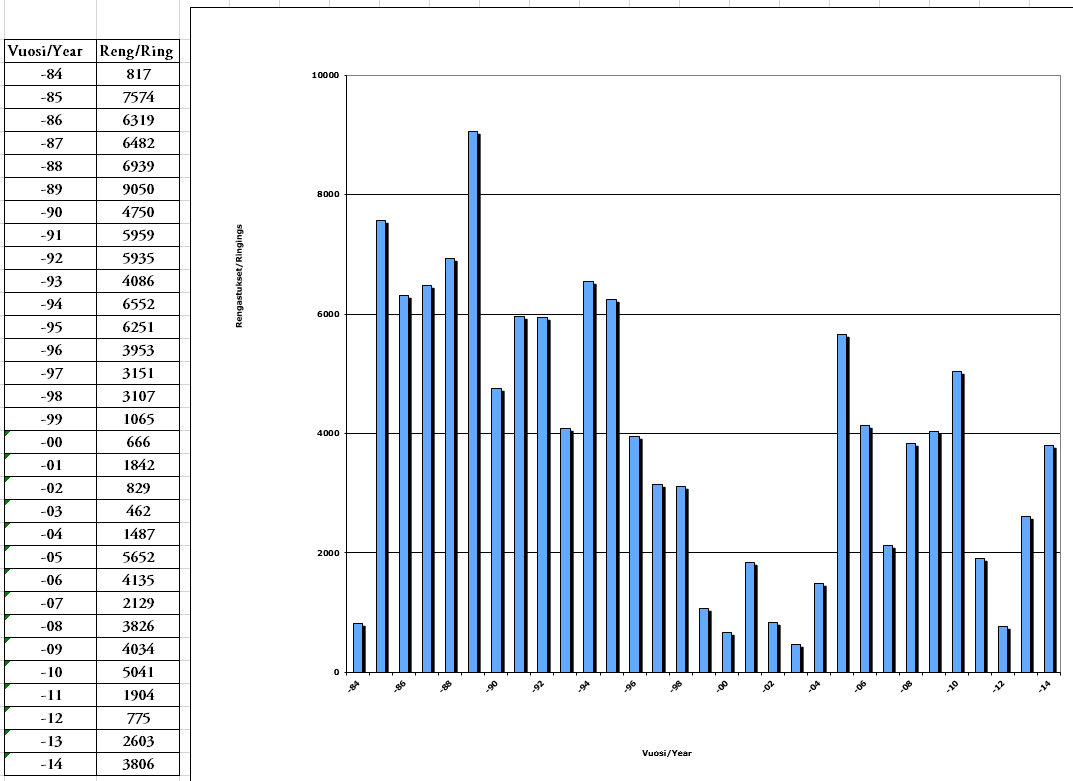 Specialities of the ringings are scarce eastern and northern species including waders like Broad-billed Sandpiper, Jacksnipe and Great Snipe, irruptive species like Three-toed and White-backed Woodpecker, Hawk and Tengmalm’s Owl, Siberian Tit and Arctic Redpoll and others like Red-throated Pipit, Greenish and Blyth’s Reed Warbler and Yellow-breasted, Rustic and Little Bunting. Of the even rarer species worth mentioning are Terek Sandpiper and Red-flanked Bluetail plus Yellow-browed, Arctic, Pallas’s, Barred and Paddyfield Warblers. Also a Great Grey Shrike of the subspecies homeyeri from souhtern Russia and three Chiffchaffs of the Siberian subspecies tristis have been ringed.

Continuous catching of birds with mistnets during migration season is perhaps the only reliable way of examining the timing of migration in nightmigrating passerines. Based on ringing data of the observatory in 1984-94 the timing of migration of some species is shown in table 2. The table shows the dates when 10, 50 and 90 % of the birds ringed during the season are reached. The time between the first and the last date shows the main migration season of the species (80 % of the birds). The median date (50 % of ringings) shows the average timing of the peak migration of the species according to ten year data. 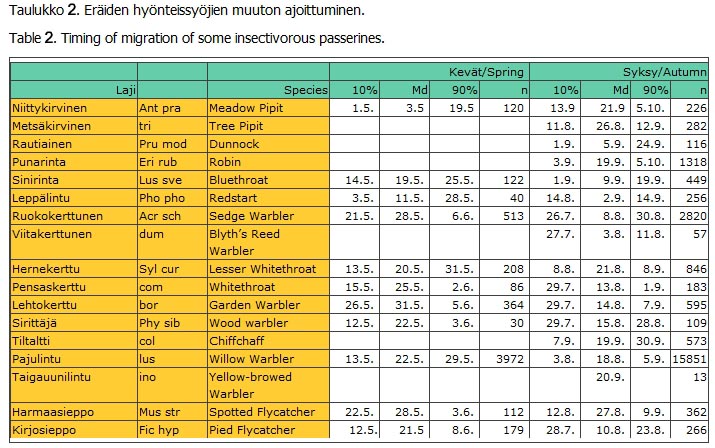 Another speciality of the observatory are so called irruptive species such as owls, woodpeckers, tits and nuthatchs. Especially Willow and Siberian Tits are in some years ringed in higher numbers than any other place in Finland. In best years the ringing totals of the Willow Tit have been allmost two thousand birds and those of the Siberian Tit allmost forty. Also Great and Bluetits are ringed in good numbers. Typically for the species the numbers of the Long-tailed Tit vary strongly from year to year. Goldcrests, Treecreepers and Nuthatchs are ringed in smaller numbers same as owls and woodpeckers.

All together over 4000 nestlings of 47 species have also been ringed at the observatory. Most numerous of these are Great and Blue Tit, Pied Flycatcher, Redwing and Fieldfare. Also species such as Marsh Harrier, Hobby, Little Gull, Tawny Owl, White-backed Woodpecker, Lesser Spotted Woodpecker, Redpoll and Little Bunting have been ringed as nestlings.
In winter birds are catched with mistnets around two feeding places. Over 4000 birds have been ringed between November and April, most numerous being Bullfinch and Yellowhammer. Also tits and Redpolls are catched in good numbers as are early migrators visiting the feeding places in spring (Robin, Chaffinch, Brambling and Reed Bunting). Rarer species are represented by White-backed and Lesser Spotted Woodpeckers, Pygmy Owl, Waxwing, Nuthatch and Arctic Redpoll.

Almost a hundred foreign recoveries, mostly from Europe, have been made of the birds ringed at the observatory. The most notable of these is a Rustic Bunting found in China (second Finnish recovery from China). Other recoveries worth mentioning are a Spotted Flycatcher from Turkey, a Redpoll from Ural Mountains, a Wood Sandpiper from Kuwait plus a Ruff from Yakutia in East Siberia and another from Senegal in Africa. Other African recoveries are a Swallow from Zimbabwe, a Pied Flycatcher from Morocco plus a Willow Warbler and a Thrush Nightingale from Egypt. Many of the ringed birds are also catched again at the observatory in later years, including f.g. one of the oldest Willow Warblers (over 6 years) recorded in Finland.

If you wish to visit the observatory please contact Markku Huttunen (markku.j.huttunen@uef.fi) or Ari Latja (alatja@gmail.com).